Quest for Wapiti – The Harvest 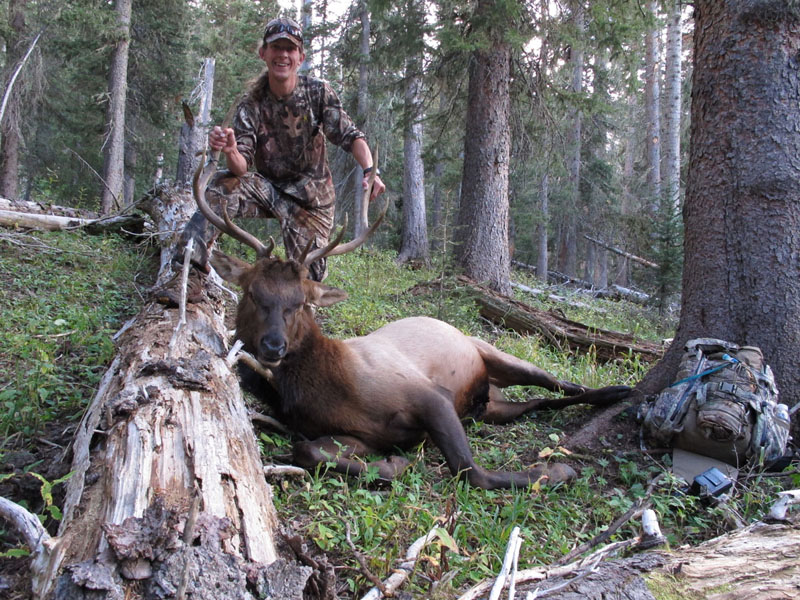 My first harvest with a bow and my first elk.

After setting up camp in record time, I decided to crawl down and across the top of the ravine where I had heard bugling on my way in. I positioned myself at the top of a small dip in the terrain and gave a bugle. This was my first in-the-field bugle, and honestly anytime I am using a game call that involves a certain level of skill, it always makes me slightly nervous when it means the difference between a successful hunt and going home hungry.

I sat in silence for five minutes wondering if setting up camp first was actually a good idea. I moved up about another twenty yards and bugled once more, this time with a response. Above me on the mountain, was a bull elk, and that…. is a beautiful thing to hear. Figuring the elk was much further up based on the sound of it’s bugle, I climbed up the slope in order to get a better position. In doing so, I spooked a bull out of it’s bed! A few cow calls seemed to kick the bull into a bugling frenzy, but the bugles got further and further away. I then bugled back at the bull, and he was instantly convinced. The bull came back and started stomping and thrashing at the ground and bushes. He was about seventy yards away and seemed to be hot and ready to come in for a fight. As the bull came around my side, with cows in order, I had a potential forty-five yard shot at a large cow. I drew on this cow, but never got the shot. As the bull came down closer, I thought I might actually have a chance. Then, from above us, a spike bull chased in after the herd.

I felt as though I had lost my chance at a nice cow, and with the elk chased off, it seemed like a big loss. I could only follow so closely due to the 80 yard avalanche clearing in the elk’s direction, being exposed would surely not help. When I finally got to the other side of the clearing all had gone silent.

I was just about to turn around when I heard another bull bugling. It seemed like a good 300 yards or more off, but as I circled around, I spooked the elk once more. To my astonishment, each time I spooked the elk, I was able to keep them calm simply by cow calling, just like in the books. I was equally amazed at how the wind hadn’t changed or swirled my scent at four in the afternoon.

I cow called twice, and having only seen a cow spook, I was overcome when a five by five bull came in. The amount of time between seeing the bull and releasing the arrow was about forty-five seconds. The amount of adrenaline you have to deal with in those moments might be easy for some people. For me, I’ll never forget the trophy class whitetail buck I missed with my recurve bow at fifteen yards, at the losing hand of adrenaline. I drew on this bull forgetting my mantra that is supposed to slow me down through the process. Autodrive sets in and that is why practice is so important. I practiced estimating yardage and shooting with the pins and a great deal of focus, but I also practiced by shooting without thinking – a method very much adapted to traditional archery. I am not quite sure what I did when shooting the bow, but I know what happened. As my arrow left the string it took great flight for the kill zone of the elk, it then hit the vertical limb of a small tree and deflected into a summersault. To my amazement the arrow had somehow managed to hit the elk with the broadhead side of the arrow. I saw the elk run off with the arrow behind it’s shoulder.

My belief was that the arrow got placed too far back and probably lost a lot of penetrating energy when it hit the limb. In short, I was after a wounded elk. As I heard the bull stomp up the opposite hill; my heart sank in a familiar feeling of defeat. I heard an elk bugle in the same direction, and leftover hope evaporated.

Normally you should wait at least three hours after placing a bad shot to start tracking your animal. Even with good placement a forty-five minute wait is worthwhile. If you start too early, the animal might get up and wander for miles leaving you with a much harder job of tracking. With it beginning to rain I was worried my blood trail would wash away,so I began tracking much sooner.

When I got to the place where I shot the elk, I could not find my arrow but did discover a splat of blood. This blood looked good to me, it was very bright and somewhat foamy. This kind of blood generally indicates a lung shot. As I followed the trail, a spot here, a spot there, I noticed the amount of blood increasing dramatically. Only thirty yards away from the point of impact there was a blood spot that was about twelve inches in diameter. I looked up, and there was my bull. Apparently I had gotten great placement and shot him in the heart. When I had thought I was hearing the bull stomp up the opposite hill, he was actually crashing.

Sometimes success comes in with instant emotion. When I found the bull I had shot, the experience was indescribable. The full experience was too much to absorb and to try and explain it now would just be impossible. After a few moments of recollection, reality began to settle in.

Now all I had to do was figure out the logistics of packing him out, I was without cell service and was going to have to camp overnight after quartering the elk. The work had begun, but was about to get unruly.