Quest for Wapiti – The Hunt 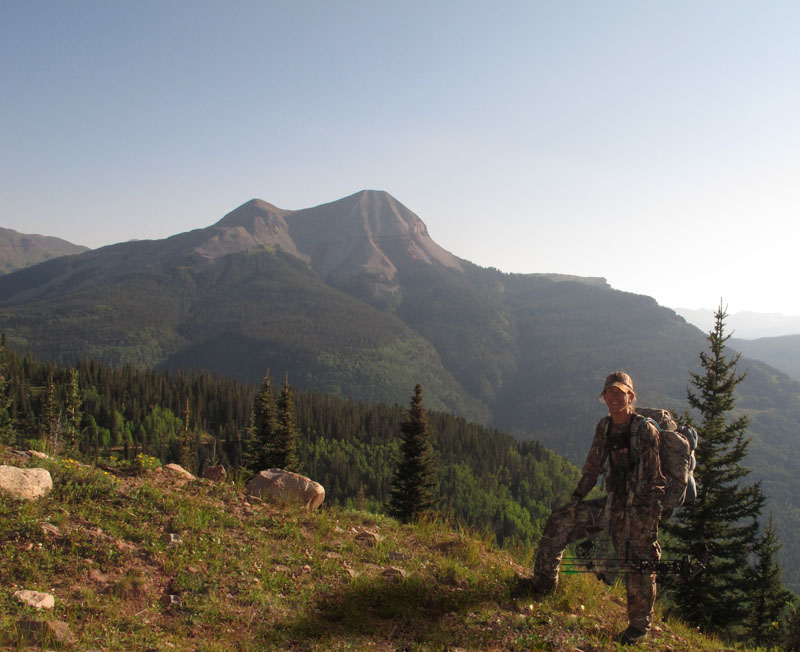 Purity, oneness, fulfillment, transcendent; all words that can only come moderately close to the experience of successfully harvesting an elk with a bow. When the accomplishment is achieved in solidarity and with a satisfying amount of effort behind, it is incomprehensible. Like a drain that becomes acutely plugged, the emotional and mental pipe become clogged with an influx of experience. I will never be the same.

Archery elk season only lasts for 4 weeks, but the effort begins much in advance. I had decided to save the recurve bow for later hunts and sought out a compound bow late last winter. Putting meat on the table and realistically approaching my novice situation lead me to the rational decision. The bow was had and so were many hours of practicing on a friend’s property. My work had only just started; hours of internet research, looking at maps, scouting, looking at youtube videos and talking to other hunters filled the gaps of standoff time between opening day and present anticipation.

I had scouted an area that was about one mile away from the road that had great sign: a wallow with fresh tracks, scat, and most importantly, elk themselves. I decided to hunt close to the road for the first two weeks of the season before they were spooked out of these areas. I soon found out, however, that the elk were easily pushed out by scouting activity and by opening day they were already gone. I have theories as to where they went now, but at the time the elk were very ghostlike, which became an increasing theme throughout my elk season.

Even though I scouted pre-season for elk, I was not able to hike into some areas I had wished to hunt. By the middle of the season, I had decided it was time to get away from the crowds so I headed into the backcountry… or so I thought. After hiking in 5 miles to a location within the San Juan National Forest, I discovered an unmapped road, with a truck at it’s termination… it seemed as though I had been duped by my maps. The next morning I headed out of the area, I hadn’t heard any bugles and the other hunters I had seen had no reports of elk, so why stay? After all the great majority of hunting elk lies in finding them.

Back at the house I pulled out my eight maps of the surrounding areas, double checked with google earth, and called NASA to see if they had any new-age elk imagery available on the USGS site. After that I shot a trophy bull, and then I woke up from my dream surrounded by maps and empty halvah wrappers. Elk hunting makes you as hungry and tired as a thru-hiker on the Appalachian Trail. The benefit is that elk hunting generally lends itself to going back home and recharging now and again. Once, while I was on the AT, I had only one Cliff bar left which I then proceeded to slobber over just before dropping it under a dirty, old, mousey lean-to. I recovered the cliff bar as you would a specimen of bubonic plague, and then proceeded to eat it. Mouse hair is a lot less noticeable than that of a dog or cat.

Roads are everywhere out here in Colorado; it is a mixed blessing. On one hand you can get a lot more places, and the old, closed down logging roads are excellent habitat and great for hunting grouse. On the other hand, a lot of people use the roads as an ends and not necessarily a means for the enjoyment of nature. I like the fact that they stay in their car; getting away from people means doing things most wouldn’t and it also means not eating McDonald’s and drinking sugary drinks everyday.

I recently read where the US supreme court ruled against the mining coalitions that were fighting the roadless areas in our National Forests. This was a decades long battle and a victory for anyone with any connection to these wildernesses. There are more critters in every nook and cranny; the trout are numerous and wild and the elk have a place where they can escape most of the hunting pressure. That is of course, minus the outfitters with horses and the crazy nutcases like myself.

I wish everyone could experience the same loneliness my elk hunting brought me. It sucks, but it is also necessary for learning certain truths that otherwise can not be explained. No, it is not safe wandering over deadfalls off trail and five miles away from the nearest road. There are some places I have ventured where if I were to be killed in an instant by a falling tree or lightning, the only thing that would ever find me would be the coyotes, bears, and ravens; effectively I would become part of the mountain. This is a realization that is comforting spiritually; full circle. Hunting will bring those in tune with their own mortality, especially when you realize how quickly you can find yourself dead. The thought of my family never being able to recover my body if it were to be in such a circumstance hurts and for that reason I carry a SPOT GPS locating device. That way, if I have a few moments, my last words will be the push of a button. Luckily that only happens to about one in five hunters, about the same as the success rate for archery elk in Colorado.

When I finally got away from people, it was obvious. Walking into a lonely canyon, I noticed the lack of mountainbike and hiker tracks. I also noticed the prevalence of elk sign. I was overcome by the experience of hearing elk bugling in the middle of the day. In a moment, I had taken off my pack in pursuit of the bugling elk, with my life in the pack I decided taking the chance in leaving it for a couple of hours could be a deadly one. If a bear got my pack and carried it off, my only means of survival would be hiking not the eight miles to my car, or the five to the nearest 4×4 road, but the 13 miles to the nearest highway, where I might actually be able to find help. That is another good reason to hide a spare key under your car’s chassis.

In a rush, I found a campsite and set up base next to a few weary doe mule deer, my favorite company in the woods. Mule deer doe seem like the mother of the woods, it is hard to say why. After camp was assembled I could hunt with my pack on. The only problem now, was the lack of bugling elk…