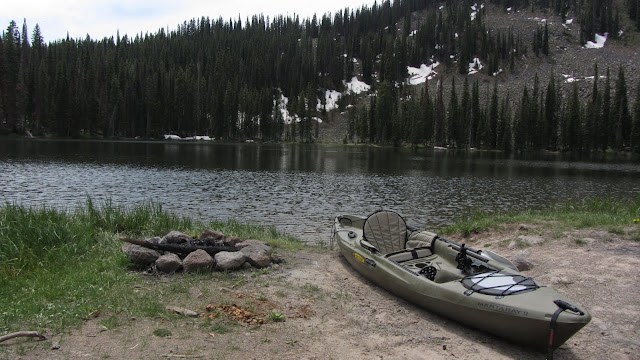 Changing careers and locations is becoming a lifestyle for many individuals in today’s economy. My experiences have shown me that regardless of how new to an area you might be, possibilities are abound. This is true even for those outdoorsmen who are just passing through. Finding the secret spot or learning the secret pattern can be frustrating and time consuming, but ultimately rewarding. Figuring it out yourself may also lead you to knowledge that will stump the long-term locals.

Before you can find the perfect pattern, you have to find the perfect place. Moving to a new state, let alone a new area, brings with it challenges of finding the local gems. You can look at a map and generally get an idea of what gets more human traffic based on the difficulty of access, but it really comes down to going there and finding out for yourself. When you find the perfect place, you often don’t realize how nice it is until you’re a few hours behind the wheel away. I have been in Colorado for a year now, and can easily recap my personal struggle with “figuring it out” at The Grand Mesa.

My first trip to The Mesa was rushed and filled with the awestruck excitement of all those accomplishments which mark a male’s progress through adolescence. This was going to be my first time fly fishing in Colorado. They say the average guy peaks in sex drive at the age of eighteen. I would argue that this is because of the new found glory of fly fishing. That would be a lie of course because the number of nineteen year old fly fishermen is just short of zero.

Either way, I was there, not sure exactly where, but at The Grand Mesa. I knew there was something better out there, but without a better map it would have been a shot in the dark (quite literally) to go any further and daylight was running low. I fished a lake with a nice gravel boat ramp, camping ground, and paved walkway around it. My introduction to fishing in Colorado could have been more picturesque and tranquil in an ephemeral pond on the side of a barn. Ok so it wasn’t that bad, and I even saw a weasel of sorts run along the bank and caught some rainbows.

The next go at The Mesa I had more time to spare and paced my fish drive as much as possible; not at all. I took my forester down a 4×4 road, through a stream set under some typical high elevation vegetation in the region (aspen trees and subalpine fir), and there I was, at The Grand Mesa. This time with three days to spare, my dog, my tent, my 6wt and 4wt rod, kayak, and fly tying equipment. I might have forgotten food to some extent, but when you’re in the zone, food seems to come second after coffee and whiskey.

When I first arrived, there were already trout rising. How big, what kind, and how many was indeterminable and beside the point. Trout rising are kind of like winning lottery tickets blowing by in a hurricane; yes, they exist, and yes you might catch one. I can sometimes fish all day long and finish with a bad taste in my mouth for the water I was on, only to see a lonely rise, instantly the place becomes a treasure. Each new stream brings with it a new chapter of entomology, geology and spirituality. The amount of text in each chapter is generally in direct correlation of the fish present / fish caught ratio.

This seemingly exclusive lake at The Grand Mesa offered much more than I could have imagined. I fished rising trout on still water for 12 hours before I really nailed the hatch. No it wasn’t the callibaetis that were in the air like clouds of locust. It was the midges (chironomidae), largest I had ever seen. I went to work tying up some size sixteen black adults, emergers, and pupae, all to no avail. Each time going back to my car and then rushing back into my kayak. Finally under the observation that these guys spent a long time emerging, I got the pattern. After a day and a half of pounding the water and tying flies, combined with the occasional attempt to kayak with my dog, I nailed the hatch. Now I was catching fish left and right, each cruiser became a victim to my fly.

My success was eventually greeted with some typical high elevation weather and I called it the quits, I had solved a puzzle and that was better than catching any number of fish. With desire satiated, I retreated back to the dog and the campsite for whiskey and a storm show. This is where I learned why they called cutthroats cutthroats. Did you know it actually looks like their throats have been cut? Actually now that I think of it, all the species of trout I know have the most obvious names.

This entry was posted in Fishing and tagged Cutthroat, fishing, Grand Mesa. Bookmark the permalink.