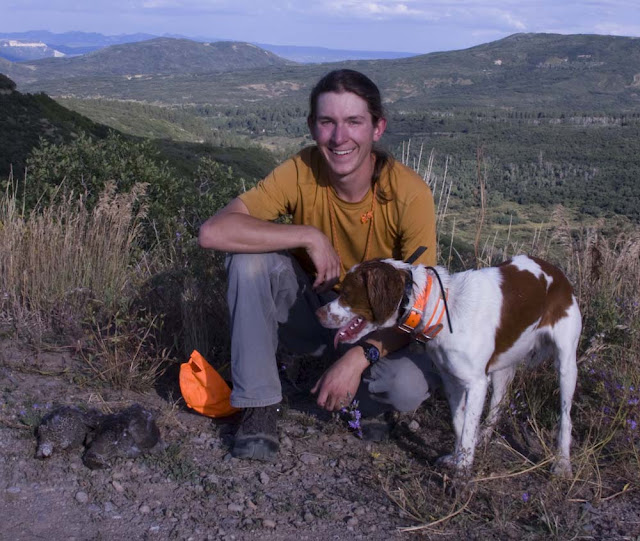 Walking down a dusty ridge road in Southwestern Colorado with my dog and two grouse on my back, I realized it was all worth while. Easier than I had expected, owning a bird dog paid off. Its not everyday a twenty-two year old longhaired freaky person apply for a gun dog, but it happened to me and I’m pretty damn thrilled about it here a year later.

I had purchased a Brittany thinking I would be hunting the limited ruffed grouse populations in North Carolina, but knowing someday I was going to move somewhere a little better for the sport. Well someday ended up being only seven months and now here I am in Colorado. It’s interesting to look back a few years and see how your dreams have materialized, if you can’t do that now, I hope you can at some point soon.

A year of working a new bird dog pup with no land, limited funds, and sparse bird work is worth its own blog entry, so I’ll spare you all the good stuff and jump to the point. The job I moved out here for was temporary and involved me working on a ranch. Half the time I was there, my workplace was at 9000+ feet in elevation, outside of De Beque, Colorado. This was ranch and BLM land, but the roads into it were all private. No one goes to a ranch to hunt blue grouse, and the habitat was perfect. I was mapping aspen stands and fifty percent of the time I was mapping, I was on the ridge top edge; perfect grouse habitat. I was able to have my dog in the field with me, so we got a lot of grouse exposure, but at the same time I was working my job and not my dog.

Fiddle (my dog) didn’t point but maybe one or two grouse all summer, and we easily saw more than fifty birds. Regardless I kept my confidence that the opening weekend of blue grouse was going to be successful, even though I was no longer at the ranch and expected to see a lot less birds.

The golden rule with a new pointer is that you Do Not Shoot a bird that he Didn’t Point! If you know a lot about grouse hunting, then you understand the frustration of not shooting a flushed grouse. If you do not know a lot about grouse hunting, ask yourself how often you see grouse while hiking the woods. A day spent looking for grouse only to see your dog forty yards away chasing them off is the same as spending a year working on something… only too hike the last mile and see the work fly away. Its part of the game though, and you keep your confidence because your dog needs it and this is a team. If you didn’t keep confident, you would quit and there is no quitting in bird hunting.

Hunting is one sport, even above fishing, that involves a good deal of detective work. You don’t pass opportunities to talk to the jackass that thought no one else would be on the road while he was off pre-baiting for martin. No, because you didn’t think anyone else would be on that road either! I got a lot of good information from that old timer. He used to hunt setters in this area, two pointers that led to my success of the weekend, and damned if that old man wasn’t nicer than hell to share them with me. I saw grouse in both places he told me to look, and the one that was a good hour and a half out on dirt roads was the ticket.

People of my generation, myself included, think they can figure anything out with the internet. Well the only problem with that is no one shares a treasure map and most old time grouse hunters don’t even think about the internet, so you won’t find them on your favorite gun dog forum. It may be a little easier out east, but not here. Here it’s different: this is the land of vastness after all. Get deep enough into the San Juan National Forest (which boarders other, equally vast expansions of national forests, wilderness areas, and BLM lands) and there you are! This is the kind of place where a second flat tire can leave you wishing for a shit creek paddle. God forbid you had to get towed out of here. If you have never had to patch a tire and resurrect it with a hand pump, you have no idea how much those damned cigarette lighter pumps are really worth, even if the motor does burn out after filling two tires!

Once I arrived to this “sweet spot” (which was referred to as “now that’s some good grouse hunting there”) I just about turned around. All the grouse I had seen were not in this kind of habitat (we aren’t talking the difference between tulip poplars and maples here). There were no aspen here and the ridge the road followed was composed mostly of gambles oak.

I drove the road to the fire tower and talked to the ranger who said it was a road generally known for its grouse hunting, but that she hadn’t really seen many this year. I decided to scoot back down and give it a second, closer look. I ran into two elk hunters and asked them if they had seen many grouse. They had seen two, and after miles and miles of hiking. Finally, I almost ran the game warden off the road while reading my gazetteer (a good way to make a decision is to kill yourself reading a map while driving) and we chatted for a moment, he told me to hunt the damn thing so I did. I will never regret that decision, and I almost passed it up, why?

Fifteen minutes into our hunt my dog went on point, I looked up and saw two grouse standing in the middle of the road. Finally a chance to shoot a bird while my dog was pointing (even if by sight). I had to run at the birds to get them to flush and when I took one down my dog went nuts, no hint of gun shy whatsoever. We must have seen six or more birds that day, and when we were walking back through some shorter gambles oak my dog pointed another bird. I walked in and this grouse game from the top of the ridge and glided down in front of me. So proud of my dog, this was a scent point!

In case you were wondering, grouse do taste like chicken… 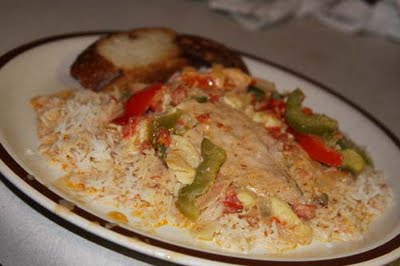