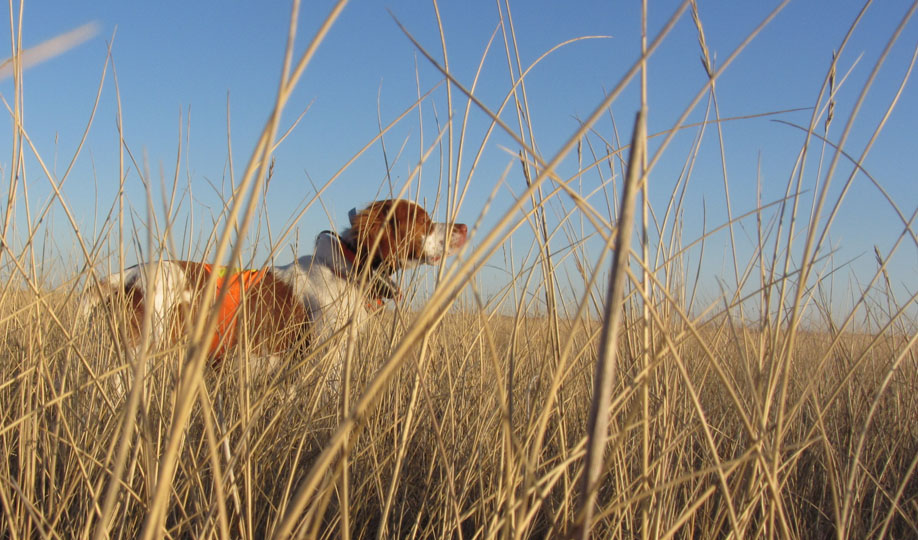 My brittany in a WIA field.

When you buy a bird dog, a lot of things cross your mind before and after arrival of the new family member, among the more pleasant thoughts: birds. It might be more practical to think about the immediate months before you; those filled with booster shots, wet floors, chewed up hands, lack of sleep from having to go outside middle of the night, etc. I don’t have any kids (fortunately), but I imagine there are at least some similarities. I can definitely think of a few differences, like instead of vomit on your shoulder it is licks in your face. There is also the obvious benefit of being able to kennel a dog when you can’t watch them. Another difference; imagine a two month old baby that can run around and actually get into trouble, what would such a creature do with so much dexterity? Get a puppy and you’ll find out, better yet; get a Brittany pup.

After a year of training my dog and moving across the country, it became apparent that hunting for pheasant no longer had to remain a dream. Of all the game bird species, pheasant were somewhat difficult for me to really get into. Something about them screams human; the homogenous agro-business landscape and non-native game species combine to make an ecologist such as myself a little squeamish, but they are one hell of a game bird.

Even though I now live in Colorado, the drive to pheasant country was still a grueling one at eight hours, one way, for two days of hunting. I didn’t have a chance to do any scouting so I decided to register for a private land access event that got me into more than 50,000 acres of prime homogeneous CRAP (not to be confused with CRP, the good stuff). Do you know where your Kellogg’s cereal comes from? I do, it looks like a more sterile environment than a Petri dish filled with isopropyl alcohol. I wonder how many teenagers in the bread belt loose their minds in vast fields of corn or wheat after eating psychedelics … doesn’t sound fun. Either way, I was able to find some decent looking CRP lands next to some cut corn. I hunted the opening day of pheasant season primarily in these CRP lands and didn’t see a single bird. I could hear distant wars commencing as armies drove roosters out of large corn bunkers, but noticed most of the solo hunters and their dogs weren’t turning much up. That first day, I didn’t see a single pheasant!

On a hunch, the following day I went to a few WIA (Walk In Access) areas 25 miles south of my previous day’s hunt. With so many hunters around, I got up at three in the morning to be sure I was the first arrival at the field of choice. The chosen WIA area had a “river” running through it that I planned to hunt after walking the edge of cover next to some cut corn. When I got close to the so named river, the lack of noise struck me as most interesting. I figured a lot of things in Kansas (I was pretty much in Kansas, you get the picture), if not most, were different, and a silent river just seamed to fit. A dry sandy one however, is what I found. Filled with tumble weeds eye high, I tried anyways. After three hours had past since shooting hours began, and a drive team combed through the middle of the WIA, I decided to leave, discouraged and tired I walked back to my Subaru. Then, with my hands in my pockets and my dog goofing off, a rooster flushed right out from under my feet. I missed and then cried a little bit, hoping my dog wouldn’t notice, not that he noticed the pheasant… Good Work Team! Right after that I tried to find him for a second flush but didn’t see where he landed, mistake number two. My pointing dog gracefully flushed one tight sitting hen (He’s a pup I remind myself) and that was enough to keep me in the field. I crossed back over some cover that hadn’t been hunted yet and found a lot of roosting rooster sign, you know, sleeping cocks. Right around this area my dog caught scent of a bird and tore off, I knew what he was going to do, and after my GPS tracker lost signal at 350+ yards (so much for 7 miles of potential range, these dog collar companies love to exaggerate their length) I saw two pheasant gliding off in the distance (he’s just a pup I remind myself) before he gets back to me, I flush another pheasant, but couldn’t tell if it was a rooster or not. This time I saw where it landed and went in for a second flush with my dog, this bird knew what was going on though, and flushed wild at about 50 yards, so much for that one.

Opening days shouldn’t be like this, it must be a bad year. That is what I kept telling myself, and it turns out 2011 is a bad year for pheasant, reports of an 85% decline are floating around now that the first weeks of the season have passed, let’s hope for more rain next year!

In a failed effort to give up and call it quits (I drove way too far and thought about this trip way too much to give up empty handed). I found a couple of small patches of CRP and stray sunflower to hunt. The first patch was about an acre in size, and split half way down the middle by a dirt road. At the parking flat there were the remnants of a successful hunt; an assortment of rooster bits, about five in total. This is a great sign that birds were here, but a good indicator that there weren’t any more hanging around for the next hunter (escaping hunters is like an extreme sport for pheasant, some of them wear helmet cameras as they dash away from whizzing lead, but most of them prefer not to partake if possible). After working the first stretch of cover to no avail, I crossed the road and went into a super thick drainage. My dog couldn’t get in front of me in this stuff (or just didn’t feel like it, not sure he knew what we were doing the past two days, hunting or going on walks, we were both about to find out the answer to that). As I climbed out of the ditch after crisscrossing through, out pops a rooster. In disbelief I watched as the rooster jumped up and started running, Come to find out, I was also proceeding to shoot the rooster on the run, and before I new it I bagged my first pheasant! Unfortunately this one came without the help of my dog, but I let him find the dead bird and praised him as if it were the right kind of thing to put in your mouth.

While driving away from this first area to the other small strip of cover (this island actually had trees growing in it!) another hunter pulled in where I just hunted. As I would want someone to do for me; I told him I just finished hunting that cover. He decided to stay, and I know he didn’t get any roosters. The next strip of cover was on the opposite side of the cut corn field and I could still see this guy hunting the cover I just ran through. Now I was hunting a peninsula of thick native grasses that escaped from the neighboring CRP land, running out into the sea of cut corn. I had a gut feeling that no one had hunted this yet (it was hidden amongst the private land) and just knew there was at least one cock in it. I zigzagged through the peninsula starting at the wide end and working my way towards the tip where it not so gracefully transformed into corn sea. As I neared the tip, my dog got this look in his eyes and went for the goods. Unfortunately, he did not put up a point, but pheasant are hard for young dogs, and for all I know this rooster flushed wild. Lucky for me, I had unknowingly put myself in between the bird and his path to better cover (the large, private CRP field behind me had ideal vegetation). This was a big rooster, and he flew right along my field of view so that his body was positioned lengthwise towards me, perfect. That rooster had a 21” tail and half inch spurs.

I’m not sure if you could say my dog helped me on this hunt, but I can say it wouldn’t have been worth going alone, and I think he and I both learned a thing or two about hunting pheasant. I would rather shoot one bird that my dog pointed than shoot a limit that he flushed, but that’s just part of the growing experience! This spring and summer, I hope to have pigeons that I can use to train him on, come next fall we will be a little more prepared and might even get enough training in to do some waterfowl retrieving!